In honor of the association’s founder Ward J. Anderson, the Great Lakes Ice Cream + Fast Food Association sponsors the Ward J. Anderson Scholarship Program.  Scholarships are awarded annually to student employees of its members. Eligible applications are read and scored by a committee of three (3) Board members.

Champions of Scholarship Trophy “The Andy” 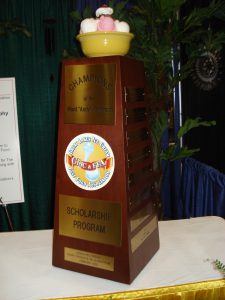 The Ward “Andy” Anderson Champions of the GLIC+FFA Scholarship trophy was introduced to the Association membership at the Banquet Dinner during the 2008 Convention and Trade Show.

The idea of a recurring auction item to support the scholarship program has been thought about by Association members for a few years and with thanks to Suppler member, Frosty Products.  “The Andy” was conceived, custom built, and donated to the Association.  The trophy is constructed with a huge custom ceramic bowl of ice cream on a walnut base and stands over three feet tall.  There is room for inscriptions to honor each year’s Champion for the next twenty-four years.

At the first year’s live auction, conducted by Mel White of Mel White Appraisers/Auctioneers, “Coach” Rick Senica of Taylor Freezer of Michigan and “Meema Fabulous” Lynda Utterback of The National Dipper magazine bid a combined bid of $3,100.  The highest bidder each year receives their name, their company, and year inscribed on a brass plate on the trophy.

Since its inception, “The Andy” trophy has raised $31,189 in scholarship monies.